Yes, he probably has too many tabs open.

Josh Krakauer is the founder and CEO of Sculpt, but you probably already knew that.

(You might not know he’s a former breakdancer with a background in drag racing, but that’s another story.)

His team deserves most of the credit.

As CEO, Josh champions a “Hustle & Heart” culture—a pursuit of growth while putting humans first. The Sculpt team was recognized for being one of the “Coolest Places to Work” in the ICR Iowa region.

A community builder at heart, Josh is obsessed with connecting people passionate about their ideas. Josh has been a long-time organizer and mentor at events like Startup Weekend and Iowa Startup Games, and programs like the Iowa Startup Accelerator and University of Iowa’s Founder’s Club.

Josh sits on the advisory board of the John Pappajohn Entrepreneurial Center, was named one of the CBJ’s 40 under 40 in 2015 at 25.

Josh has spoken all over the midwest about lessons he’s learned helping brands “win the internet”, though he never does the same talk twice.

In his free time, Josh thinks about his busy time. 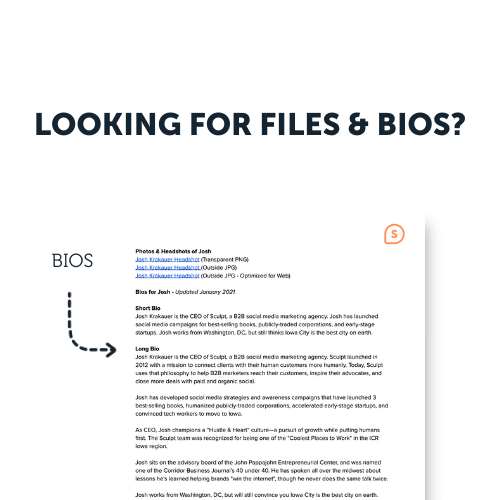 Everything you need in one place.